During 2015 I’ve been heartened by the number of schools who’ve included my short format, illustrated reads in their accelerated reader programmes – many of the EDGE books produced by Franklin Watts are ideal for reluctant readers or for those who just want a short book – often such books seem aimed at a younger readership but this isn’t necessarily the case with the EDGE series – I have a total of six titles and they’re certainly aimed at readers from years 6-9 (KS2 through KS3). Two of these are WWII stories, including Run, Spy, Run! shown here. Then there are the 4 titles in a mini-series called Task Force Delta following the work of my US Special Forces hero, Major Nathan Connor. At one school I visited recently the librarian introduced me to two lads who’d ‘fought’ over getting their hands on the library copy of one title first – so I assume they’re going down well! Info on all the titles can be found in the free downloadable catalogue on the Home Page or check them out from your preferred book supplier. 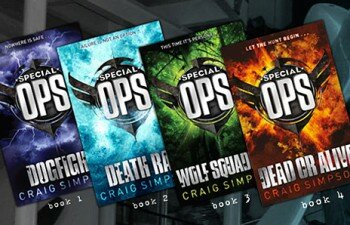 Craig Simpson is an award-winning writer of YA fiction, published by Penguin-Random House (Imprints: Corgi & The Bodley Head), Hachette … END_OF_DOCUMENT_TOKEN_TO_BE_REPLACED

An award-winning WWII series inspired by the real wartime Special Operations Executive (SOE). Book 1: Dogfight Where it all begins! … END_OF_DOCUMENT_TOKEN_TO_BE_REPLACED

Events Over the years Craig has done many talks about his books, becoming a writer, and the true stories that inspired him. He has … END_OF_DOCUMENT_TOKEN_TO_BE_REPLACED

Have you always wanted to be a writer? No. When I was a teenager I wanted to be a vet, and later a scientist. I often ask students at … END_OF_DOCUMENT_TOKEN_TO_BE_REPLACED